Standard Virtualization vs. Containerization: Which is Right for You?

Virtualization brought in an unprecedented paradigm shift in cloud computing, and now we're seeing another shift with the emergence of the containerization. Read on to explore the following questions:

What Is a Virtual Machine?

A Virtual Machine (VM) is an emulation of a hardware computer system. It’s typically called an image, and its virtual environment acts as a stand-alone computer. Think of it as a “computer within a computer.”

A virtual machine relies on the system’s hardware to emulate the exact environment needed to install and manage applications. There are a couple of key advantages to doing this:

Depending on the use case, VMs can run an entire operating system (OS) as a process, which allows the substitution of a real machine for a virtual machine. One disadvantage is that each Virtual Machine contains an OS. The required application – and its dependencies can take up a lot of space on the machine and require heavy utilization of host resources.

What Is a Hypervisor?

A hypervisor is what isolates individual VMs. Besides providing this divider between multiple operating systems, it also simulates the hardware components of a traditional OS. Virtualized versions of resources, such as CPU, I/O, memory, and others, will be available and manageable within your hypervisor.

People often confuse Virtual Machines and containers, but there is a distinct difference. Containers sit on top of physical servers and their operating systems. Each container shares the OS kernel. Containers are smaller in size since they don’t need to host the OS as well.

This provides the following advantages:

While Virtual Machines abstract the entire hardware server, containers abstract the Operating System kernel. This is what makes the lighter and faster loading applications possible. It can reduce start-up time from minutes to milliseconds since it doesn’t have to fire up the OS contained in the VM.  Instead, it shares the OS that’s already running outside the container, making it less resource-intensive.

What is Docker as a Containerization Platform?

Docker is an open-source solution that offers containers.

Because containers are platform-independent, Docker can run across both Windows and Linux-based platforms. It can also be run within a VM if needed. The main purpose of Docker is to facilitate microservice applications in a distributed architecture.

When compared to Virtual Machines, the Docker platform moves the abstraction of resources from the hardware level up to the Operating System level. This allows for the realization of the various benefits of containers, such as application portability, infrastructure separation, and self-contained microservices.

Docker is free for individuals, including unlimited public repositories. Professional versions for individuals and Team versions are available for a monthly fee. Docker is also a strategic partner with both Microsoft Azure and Amazon Web Services (AWS). 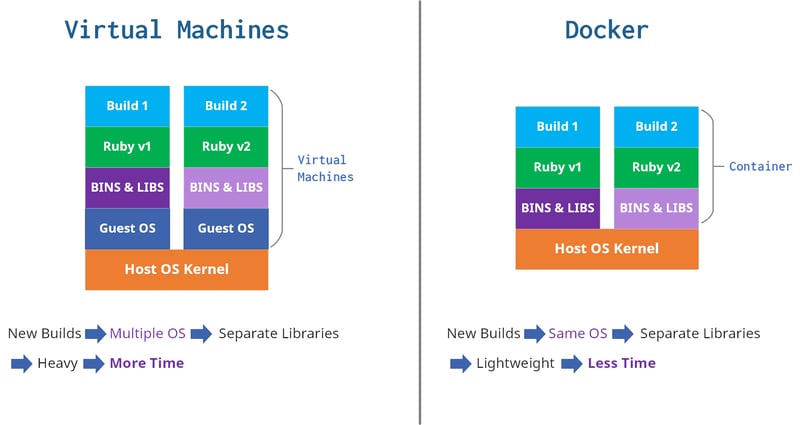 Virtualization creates a virtual computer within a computer.  It keeps software segregated from other applications and data, which adds an extra layer of protection for those applications running on the virtual computer. Virtualization does require its own operating system for each virtual instance, however, you can run multiple OS versions on the same physical machines.

Containers are smaller and lighter in size and more portable. Since they share the machine’s OS, you won’t be able to use different operating systems within the same physical machine. However, containers do allow you to segregate specific applications for maximum processing capacity and increased speed.

Comparing virtualization vs. containerization and deciding which one is right for you, think how you plan to use it, the application needs, and the host’s capacity. By carefully reviewing the advantages and drawbacks, you can determine which fits your needs best.

At delaPlex, we understand that every business has unique needs. We perform an in-depth analysis to create customized solutions for our customers. We design, build and maintain products and solutions that can improve the way you do business.

If you need help with virtualization, containerization, cloud services, or any aspect of your cloud migration or digital transformation, contact the experts at delaPlex and let us get to work for you.

Want to learn more about how delaPlex can help you? Contact us today to start the conversation.