What is Net Neutrality, and Why is it Important to My Business? 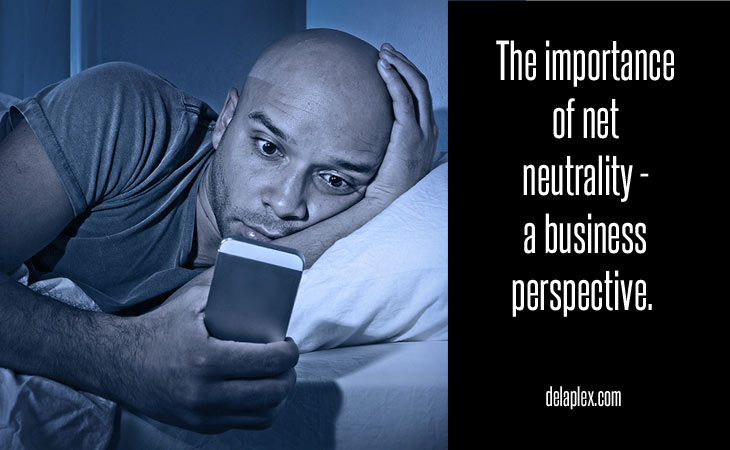 Net neutrality, in simple terms, is the concept that access to all content should be available to all users, and all content is offered at the same speed, with loading times subject only to the limitations of the users' modems and the website's design. In other words, the ISP cannot take discriminatory actions to prevent or impede users from visiting whatever website they want to visit unless required to do so by law, and the ISP cannot transmit content at different speeds for the different sites it hosts.

To better understand how net neutrality works, imagine that you needed to make two phone calls on a telephone system that does not operate under a neutrality policy. The first call is to a drug store that is part of a major national chain. Your call is connected quickly and the voice quality is excellent. Your second call is to a family owned store just down the street. It takes several seconds of "dead air" before you are connected, and there is so much static on the line that you can barely understand the clerk. The major chain has paid extra to have the phone company prioritize its calls and provide a better quality connection. The family owned business cannot afford the premium rates, so it must settle for an inferior level of service.

Now translate this concept to the Internet. Suppose an ISP had the power to prevent users from accessing certain websites. Potentially, the ISP could block websites unless the owner paid handsomely to avoid it, or the ISP could block websites with content the ISP owners did not support, such a site owned by a business that was in competition with a company in which the ISP owned stock. Knowing that loading time is crucial and that visitors frequently leave a site that is taking too long to load, the ISP could permit favored sites to load faster, either for financial compensation or out of the ISP's own preferences. In short, the fundamental concepts of net neutrality are:

Net neutrality has been a critical part of "leveling the playing field online." Any business that can afford a small monthly hosting fee and the cost of having a website built can have an Internet presence. Whether the goal is to offer online shopping, an informative blog, conduct a marketing campaign or host a simple page giving the business hours and physical address, the smallest company can reach potential customers around the world and compete with the largest corporations.

The big guy already has the SEO advantage.

Large corporations already have an advantage over small businesses when it comes to the Internet — search engine rankings. If you type the word "buy" followed by virtually any product in your browser's search box, the first page or two of your results will probably show links to companies such as Amazon, Best Buy, eBay, Target or Walmart. These sites receive a lot of traffic; they are "household names" and can also afford to pay for "click-through" ads on other sites. However, if your site is relevant to the search, it will appear in the results although it may be on page 100 or even further back. Furthermore, your customers can always access your site by typing in your URL from their receipt, your business card or an advertisement. Without net neutrality, your site might not appear anywhere in the search results, and ISPs could even make sure that no one could access your site by entering your URL.

An open, neutral Internet has spurred a great deal of innovation and creativity. Take, for example, an entrepreneur who designs a new product. Before the Internet, it would most likely require selling the patent or finding a major retailer to market the product. With the Internet, the inventor can market the product directly to the consumer without relinquishing any control over his idea. Without net neutrality, however, his invention might never be seen online, especially if it had the potential to impact the sales of a company with the funding to suppress the competition. At delaPlex, we naturally want the most exposure for our clients and their products when it comes to competing in the global marketplace that the Internet has played a major part in creating. If the net-neutrality policies are enforced in a transparent, equitable manner, most businesses stand to gain significant benefits.

Your business could suffer from ISP pricing discrimination.

Without net neutrality, your business could also suffer indirect losses. Suppose ISPs could offer users a range of different packages, similar to what cable and satellite television providers offer. Users might have to pay more to watch videos, for example, or to access sites hosted in foreign countries. Costs could be based on the speed with which a site loads, with an additional charge for slow-loading or low-traffic sites. Thus, if you post videos on your site or receive little traffic, users might "opt out" and refuse to pay more to access websites with properties similar to yours.

You might think that competition between ISPs could address the issue. If one ISP discriminates, restricts traffic or implements unreasonable charges, why not just move to another ISP? In many areas, that is easier said than done. As of 2014, 55 percent of the U.S. had only a single ISP capable of providing speeds of at least 25 megabits per second, which is essentially the starting point for "high-speed Internet," according to the chairman of the FCC, Tom Wheeler. Thus, for many businesses and consumers, there is no other option.

Despite what many might think, net neutrality is not a new concept — it has been the way that the Internet has always operated. However, it has always been something of a "gentleman's agreement" in the U.S. rather than a legal requirement. If net neutrality disappears, small- and medium-sized businesses could suffer much more than large corporations with deep pockets.

In summary, if the Internet remains neutral, then: